A fusion of genres - a vast muddle of moods, string arrangements & blues guitar licks. An interesting & varied blend of instrumentation, which underpins the multitude of electric and acoustic guitars

After many a recommendation, I eventually got around to getting myself a copy of Fraser John Lindsay's Melodic Mayhem, and after a few listens I am thoroughly transfixed.

Aye – join the queue, will say the many who have preceded me. But, really. This is a work of utter genius, and not only very clever, but very beautiful as well, which for me is by far the most important thing.

As a musician, I marvel at the masterly and always tasteful guitar phrasing, and at the broad palette of sounds, always appropriate for the different atmospheres.

As a composer, I am flabbergasted at the density of ideas – there’s a new one (and a good one at that) every few seconds, each one seamlessly and tastefully merging into the next.

As a producer, I am aghast at the energy, sustained focus and determination that a project like this must have required, not to mention the in-depth understanding of all aspect of music making necessary to come up with tracks like these. As a music lover, I am left – once more - in desperation at the status of the “music industry” these days. If a record like this came out in 1971, Fraser would be up there with the Frank Zappas of this world. It was 2011, the age of X Factor. Please, Fraser, please, take this music on the road, and make the world beautiful again.

AND NOW FOR SOMETHING A LITTLE BIT DIFFERENT

Fraser John Lindsay‘s Melodic Mayhem is probably the most unique album you’ll hear all year – mixing acoustic tracks with blues rock right through to a more grungy rock ‘n’ roll style. Most unique thing about it though is that there are no vocals on any of the tracks – it’s 100% Instrumental.

Before you decide it’s not for you, wait, read on, and check out the teaser tracks on playlist above because it really is a damn good album. For instance, the arrangement of the tracks is well thought out, as a number of individual tracks blend seamlessly into the next to produce an eclectic mix and the variation of styles is also impressive.

Fuzz 48 gets it off to a sizzlin’ start, with sweet guitar riffs and a kick-ass drumbeat. The only possible criticism would be that it’s too short, but that just leaves you wanting more and that’s exactly what you’re in store for.

With a slightly more relaxed style comes Melodic Relief. The guitar riffs are pretty epic and if you close your eyes you can almost feel it take you on an audible adventure.

Offering a more exotic style is Flamenco Blues, with good use of the percussion to recreate a real flamenco vibe. There’s still a good ‘rock n roll’ feel to it though with powerful guitar riffs and energetic drum beats.

Chill time has never been so hardcore than with Acoustic Vengeance. A very relaxing song with good use of the violin as well.

Don’t get too relaxed though, because Devastator comes crashing through next. Love the bass on this one, very upbeat and punchy. In fact I can’t say a bad thing about it, it’s definitely one for the playlist.

Electric Vengeance will be a hit with the ‘air-guitarists’ among you, because there’s lots of mixed guitar action in this one. Solid drumbeat too with a more subtle bass and good use of the reverb on the outro.

Add Harmonic Lullaby to your bedtime playlist and fall asleep in true rock ‘n’ roll style. For the most part a very gentle and relaxing track, but like a true rock star it just can’t contain itself and inevitably hits out with a crackin’ burst of energy.

Turning up the heat is Mexican Sunshine. Possibly the most ‘complete’ song on the album with a consistently solid drumbeat and rhythm guitar combo from start to finish. Catrina Fleming still shakes things up a little though with an impressive violin solo. Overall a bloody great track!

Time for some good old fashioned harmonica action with Munro Blues. Just close your eyes and let it take you back to a simpler time when men were men and land disputes were settled with the trade of live stock.

SWB can be summed up in three words – Subtle. Wild. Beautiful. It’s a chameleon type song, it can be laid back and relaxing or it can really perk you up. It has some epic keystrokes and enticing riffs with a deceptively subtle energy.

You can’t beat a Crosstown Drive, and this is the perfect soundtrack for such an occasion. ‘Nuff said.

16 Bar Bliss, if you’re old enough to remember it, may remind you of The Equaliser theme tune. Either way it’s super-smooth in all the right places with enticing guitar riffs out the wazoo.

The opening line of Overture shares some subtle similarities to Poison by Alice Cooper, but don’t worry, no chickens were harmed. The song itself though is one funky chicken, just erratic enough to hold your attention yet not so much that you lose interest.

Epic tune. Just as any good pest should be, The Menace is rough and chunky with a Well of depth. It has its smooth moments though with some epic guitar riffs.

Sad Theme is deep, if you let it it’ll grip you by the nards and make your eyes explode with emotion. Simple yet complex at the same time, you’ll either love it or hate it.

You can buy the physical release from various resources on Fraser’s online-store, or you can download the digital album from Amazon and iTunes. However, we recommend the CD version due to the mixed structure of the album.

Talented Fraser John Lindsay, 26, is hoping to pack out Glasgow's Classic Grand venue when he performs tracks from his Melodic Mayhem album on March 3.

Work on the instrumental album started 24 months ago with most of the tracks being recorded last year before the final touches were put in place at the world famous Abbey Road studios in London.

Fraser feels fortunate that so many musicians have been able to work on the album, assisting in creating the interesting and varied blend of instrumentation.

Instruments such as trumpet, Hammond organ, violin, cello, harmonica and French horn all make an appearance.

Fraser fell in love with music at a young age. He can play the piano, violin and drums, but it was the guitar that he found most enjoyable when he started playing at the age of 10. “It is something that comes very naturally to me.”

Now, our Mr Lindsay shows a not inconsiderable dexterity here but there also is no denying he is a very mannered player so one has to assume that his tongue was firmly in his cheek when he called his album “Melodic Mayhem”. He chooses to avoid fretboard pyrotechnics and instead takes deadly aim at mood creation and, whilst not entirely successful, he has succeeded in making an album that many rock fans in their twilight years will enjoy.

Recorded by Fraser John Lindsay at

I’d like to thank all the fantastic musicians for playing on my record. You helped to make my vision a reality, thanks for taking the time to help me out.

Thanks to all the engineers for their input, and  for being so patient. I’m also grateful to those who were kind enough to let me borrow guitars and equipment, without them I could not have created such a wide range of sounds.

Finally I’d like to thank my friends and family for their support and advice.

I hope you enjoy the album! 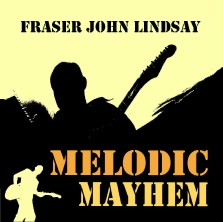